Dominica's Boiling Lake
Dominica, the Nature Isle of the Caribbean ...has a multitude of adventures just waiting to be discovered and experienced. Over 40 hiking trails, winding through dense, rain forest mountains lead to waterfalls, mountain tops and lakes. Dominica's Caribbean Sea waters provide some of the best scuba diving and marine reserves in the world. Isolated, black-sand beaches offer solitude and tranquility for those that discover them. Over 360 freshwater rivers afford opportunity to bath, swim and play in cold, crystal clear water.  Visiting the Carib Territory and the native Kalinnago's gives a wealth of cultural information insight to Dominica's first peoples and their ways of land and sea.

Dominica...a paradise defined by many features.
Dominica's Boiling Lake is approximately 200-250 feet across (the second largest in the world) and rests at the bottom of a large sinkhole-like basin. More accurately, it is a flooded fumarole, an opening, crack or hole, in the Earth's crust, generally located within the vicinity of a volcano, which emits steam and gases escaping from molten lava below. Currently, the lake is viewable from a broad, cliff-top ledge about 100 feet directly above its shore. High rock walls surround and create the basin.  ...fall off the wall -- more than likely you end up in the pot.

The lake’s grayish-blue water is easily viewed in its perpetual rolling-boil state -- looking like a giant pot of water cooking and steaming on a stove. The basin’s water is replenished by rainfall and two small streams which drain into the area.  The water then seeps down to the lava and is heated to the boiling point. 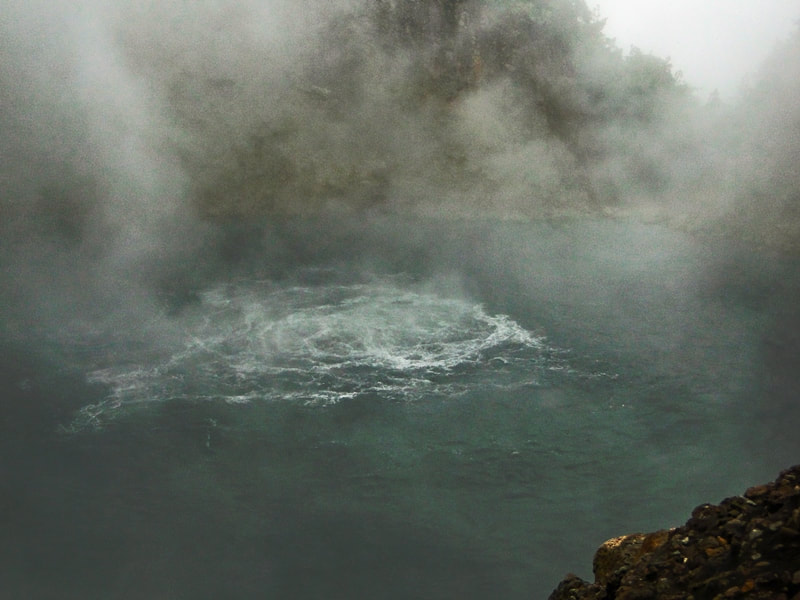 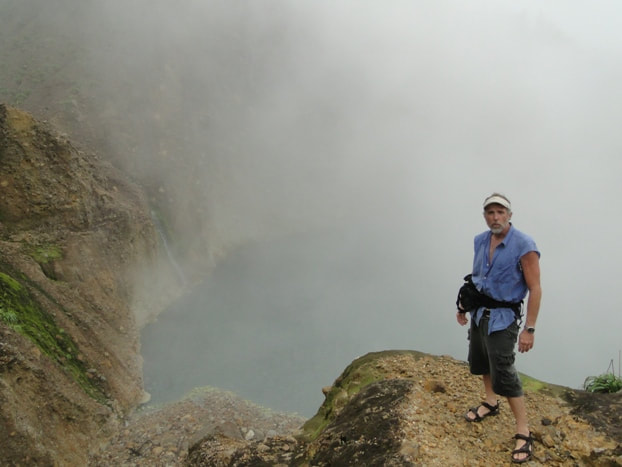 The trek to Dominica's Boiling Lake is perhaps more about the journey than the destination.    ​

On the way, the trail leads through another volcanic area called the Valley of Desolation – its geo-physical makeup perhaps provides more curiosities and interesting features than the lake.  Here, the air is hot, steamy and moist, supported by the sharp, acrid smell of sulfur.  The area might remind one of a steam-room, dry cleaners and laundromat, combined. Everywhere, vapors and gases are bubbling and escaping from boiling sulfur-water pots, small spraying and hissing geysers, cracks and holes, and a small stream that runs through and beneath the terrain. When exploring, one must be careful as tiny, often invisible sprays of steam will easily burn an ankle or foot.  Want to cook your lunch or boil an egg? …you can do so most anywhere, without lighting a fire!
And, steps! …a grueling, countless number of wet-slick, moss covered stair steps, (a huge feat of construction, itself worth pondering) cut from trees along the trail and laid into the steep path for miles or, when necessary, cut directly into rock.  (Over a period of time, the steps have been added to the trail to prevent excessive erosion due to foot traffic.) So many steps up and down into the near vertical inclines that, in comparison, one might imagine climbing the Sears Tower in Chicago, up and down 50 times.  But, that exercise might be less challenging.

Deceitfully easy in the beginning, the trail slopes along a relatively gentle stretch of terrain, winding through the shadowy quiet of the rain-forest.  But then, after crossing a stream and an enjoyable drink of cold, crystal clear, water, the demeanor of the path change.
​Now, the journey lends itself to a challenging contest of leg muscles against steep climbs up and down sometimes along winding, paper-thin ridges where, in several locations, one can easily peer, both right and left at an arm’s reach, hundreds of feet down.

For our journey, clouds hugged the forest most of the day. Fleeting breaks along the path, tunnels in the foliage, provided spectacular views of both coasts, nearby mountain peaks and villages, miles below.  Hot and humid air settled on us as we climbed from the Caribbean side of the mountains.  Then, a cool, chilly breeze met us at the top as we proceeded along the Atlantic side portion of the trail.  Finally, hot and steamy conditions met us at the "Valley of Desolation."

Having passed through the Valley of Desolation, we reached the boiling lake after 2 hour and 40 minute trek. (Normal time is around 3+ hours one way.)  With the clouds hugging the area, light rain and steam rose thick from the lake; visibility was low.  Only when a breeze blew through for a few minutes were we given a partial view of the boiling water, churning below as water in a pot on a stove would.  After a light lunch and short rest, we began the all burden of retracing our steps.  But not before taking an hour to soak in the small, bathtub-hot sulfur pools and waterfalls located in the Valley of Desolation.

With determination, rebelling leg muscles and personal gratification, the return journey to the trail head was finally met.  An experience not soon to be forgotten as, for most of us, our legs imploded into rock-hard tightness and pain… a side effect that lasted far too many days.  ...a challenge someday to be taken, again.
Powered by