In some of the following photos there is a pile of yellow rope along with a couple of blue tarps piled on Dominica's west coast's Batalie Beach, located near Salisbury.  Tony and the guys are building a  FAD - "Fish Attraction Device."

The FAD works by providing cover for small fish in the tarp area which, after deployed into the sea float in the current 20-50 beneath the surface... bigger fish are attracted to the smaller fish... yet bigger fish are attracted to those fish, etc... the end result being really large predator fish such as mahi-mahi, tuna and marlin being attracted into the area to feed... the fishermen then set their floating lines a distance from the FAD so that the lines drift with the current to and past the FAD buoys.
Click any photo below to enlarge and or view slideshow. 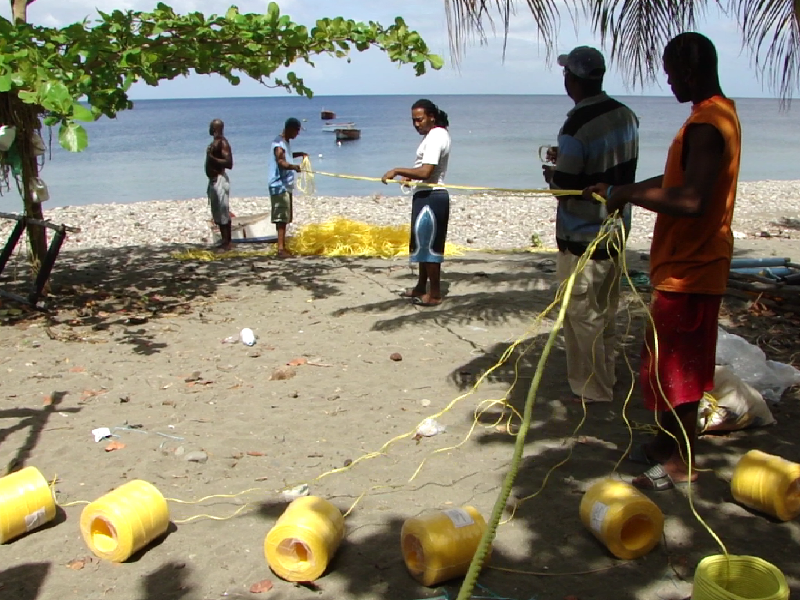 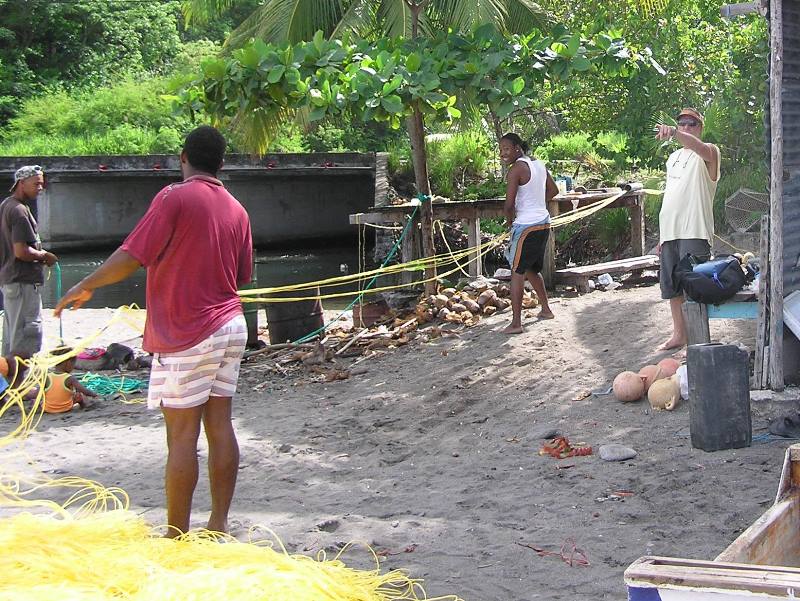 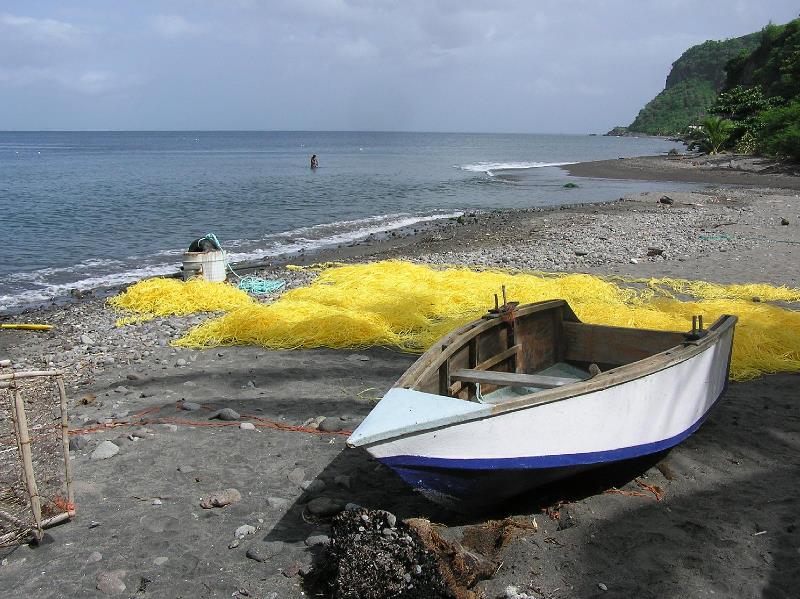 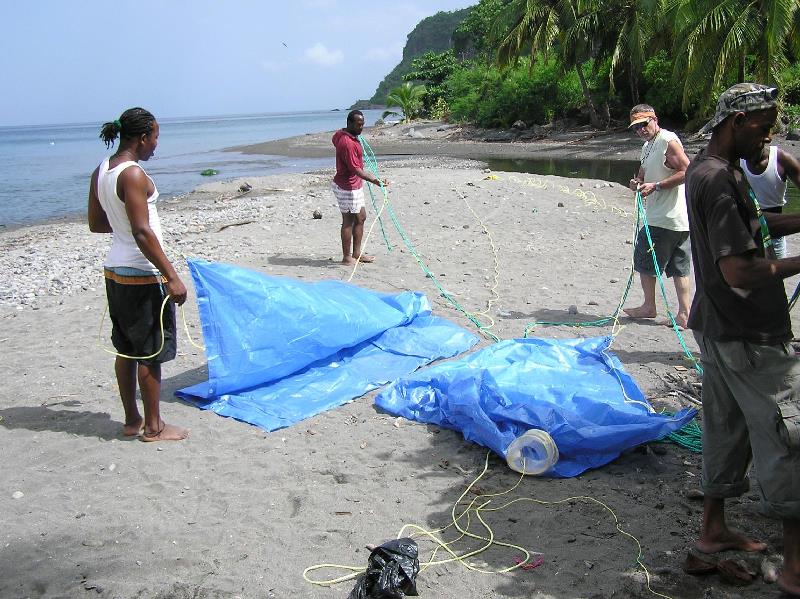 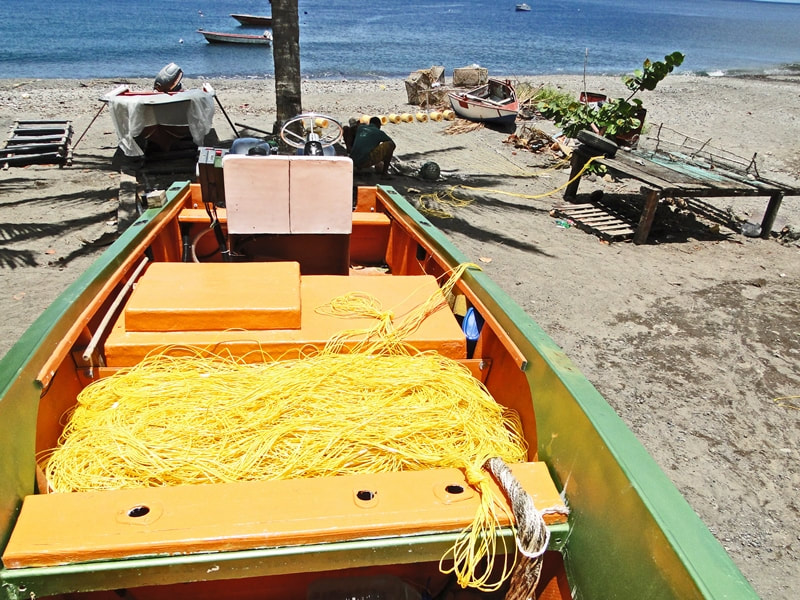 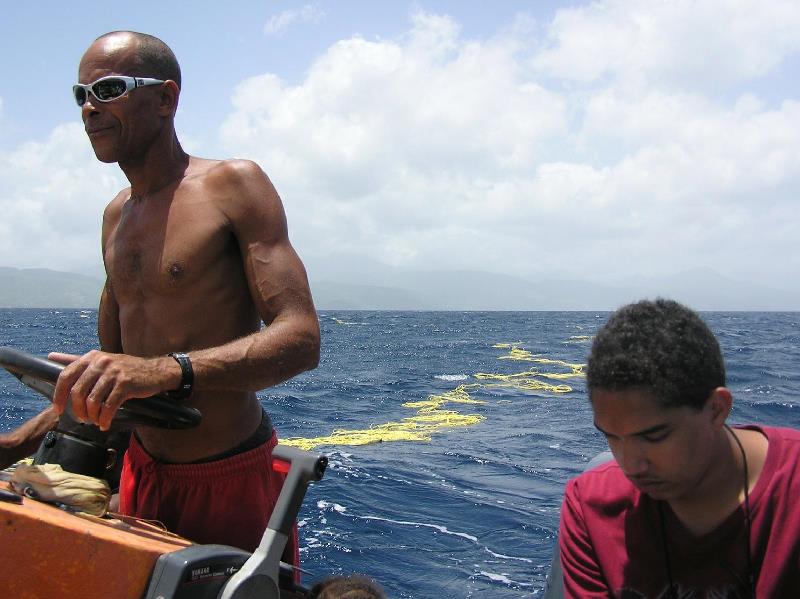 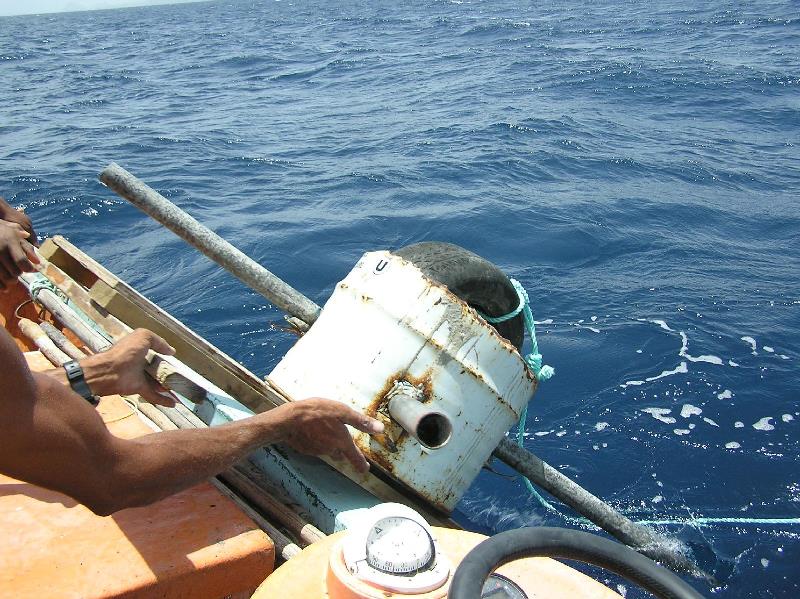 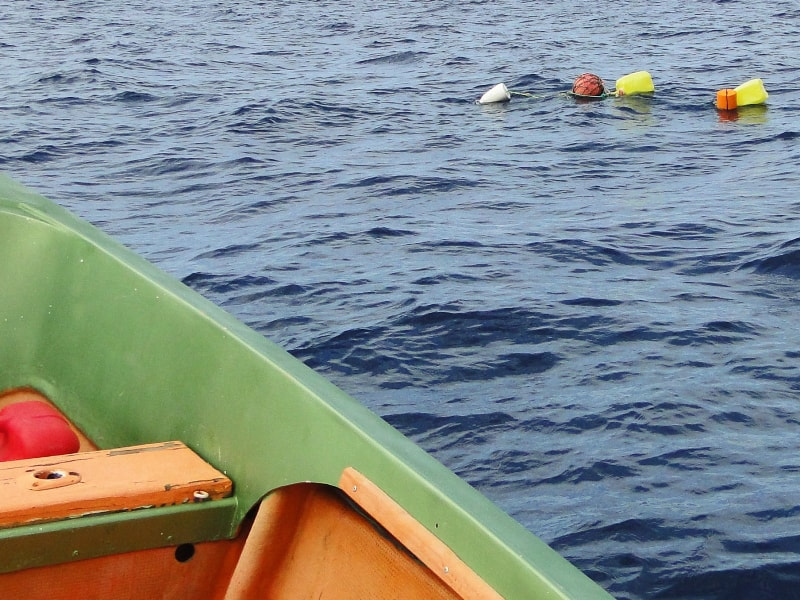 The FAD is constructed from a mile or more of rope consisting of 8+ strands of yellow, plastic bailing (banana) twine spliced together; the tarps are tied near the top end while, at the bottom end, 2 strategically placed lengths of pipe and a tire are secured are within a half-barrel full of concrete... the FAD's anchor.

When finished, the FAD materials are loaded on to the boat and transported 4 to 50 miles out to sea.  Once at the drop location (carefully recorded on a GPS device), large floats are attached to the surface-end of the rope several feet above the tarps, then the chore of letting the rope out begins... ending with the anchor being shoved over-board.

FADs are often placed in waters a mile or more deep -- the fishermen take in consideration the depth and current and the associated angle needed for the floats to remain on the surface... too short of rope and the FAD is gone forever, the buoys & tarp dragged far beneath water making the attraction device impossible to locate or use.

Once the FAD is set, it is allowed to attract fish for a few weeks before fishermen journey back "out there" to try their luck and skill through the use of hand set, single hook, lines.
Fishing With Nets

Fisherman also frequently use huge nets for fishing. The nets are first carried with small boats, where they are then dropped and stretched  beginning from the shore, or just off shore, to catch small, schooling fish such as ballyhoo and blue robins.  The nets are anywhere from 100 to 300 yards long and up to 50 feet tall.

If deploying the net from shore, the net is placed in a Kalinago (Dominica's indigenous people) built canoe or a small boat with motor. Once a shoal of fish is spotted moving near the shoreline, leaving one end of the net on shore, a fisherman quickly rows the canoe out to sea in a wide arch, encircling the unsuspecting fish.  Groups of fishermen on shore then begin to pull rope attached to the net, back onto shore, tightening the net's circle ...until men, boat, net and fish are all neatly corralled along the shoreline. The net with fish, are then pulled to shore, sorted and sold for food and bait.

Scenes such as this take place at dozens of locations along Dominica's shoreline each early morning.
​Fish-pots  (Traps)
From any vantage point near Dominica's coast line, one can easily spot numerous small white objects floating from between 50 to 400 yards off shore.  Generally, these floats are empty plastic jugs and bottles of various sizes, tied to lengths of twine or small ropes, that are attached to the pot, marking its location.

Most are made from chicken-wire tactfully stretched over a frame built from small diameter tree limbs; the pots are built to let fish wander in, but not out. Two to four strategically attached stones are also attached to help the pot sink when pushed overboard.

The pots are set, submerged at 20 to 100 feet depths, onto a variety of bottom types, but especially in or near reef areas.  The traps are baited with old loaves of locally made bread, split coconuts, old fruit and other items slow to decompose while attracting fish: the pots are checked every 1 to 4 weeks.

They are retrieved by either pulling up the line that is attached to the float marker or, a heavier line with a large hook is dropped down to snag it. Once the trap is hauled on to the boat a small door in the trap is opened and a hoe-like stick is used to pull the fish toward the opening where they can be grabbed and placed in a bucket.  Caution is taken with captured sea snakes and eels... some saved for selling, some tossed overboard. Once the catch has been removed, the pot is again baited and sent back down.  The catch is then taken to shore where it is sold near immediately from the beach or taken into local villages and sold along the streets.
Click any photo below to enlarge and or view slideshow. 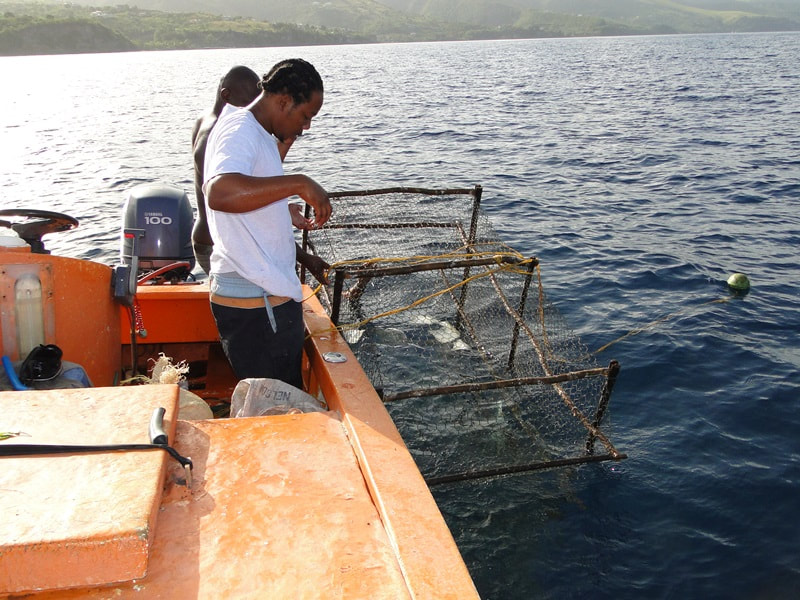 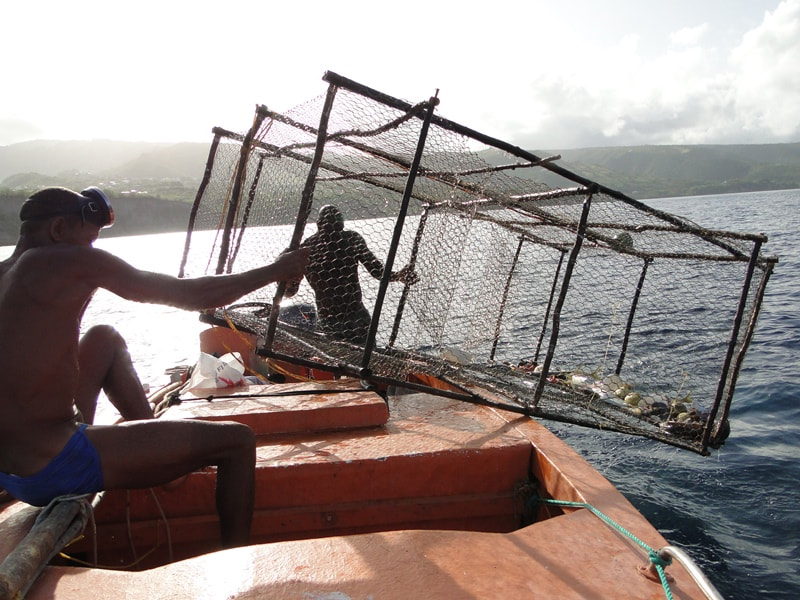 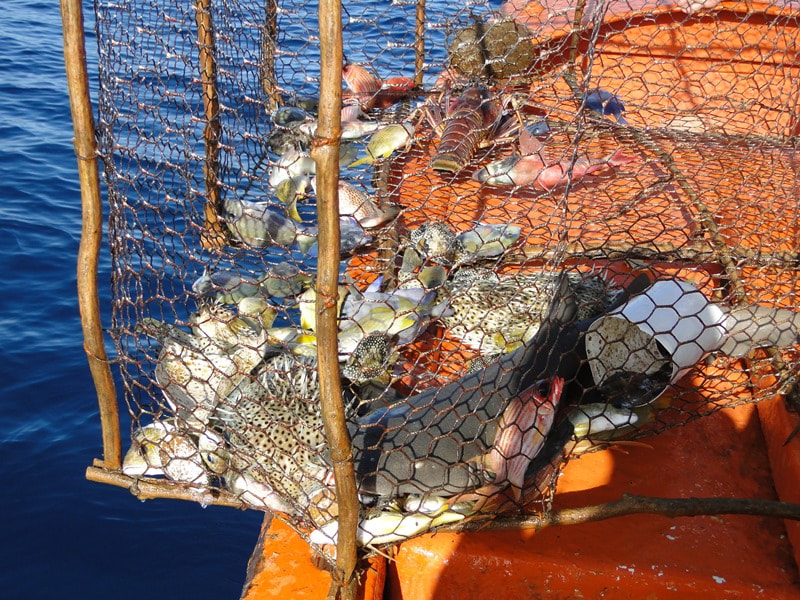 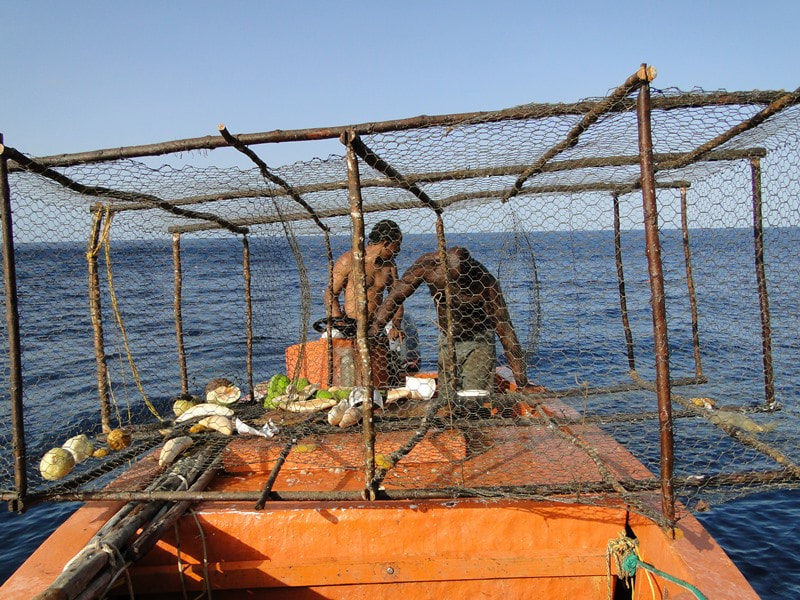 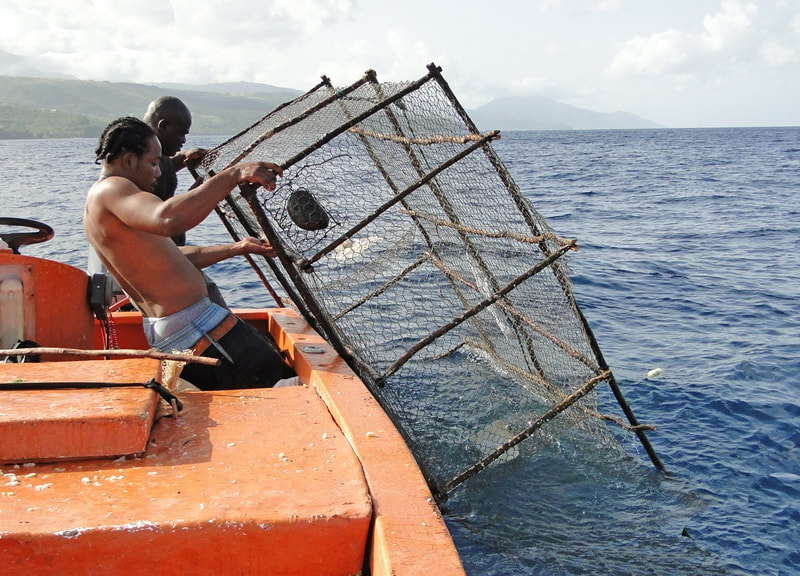 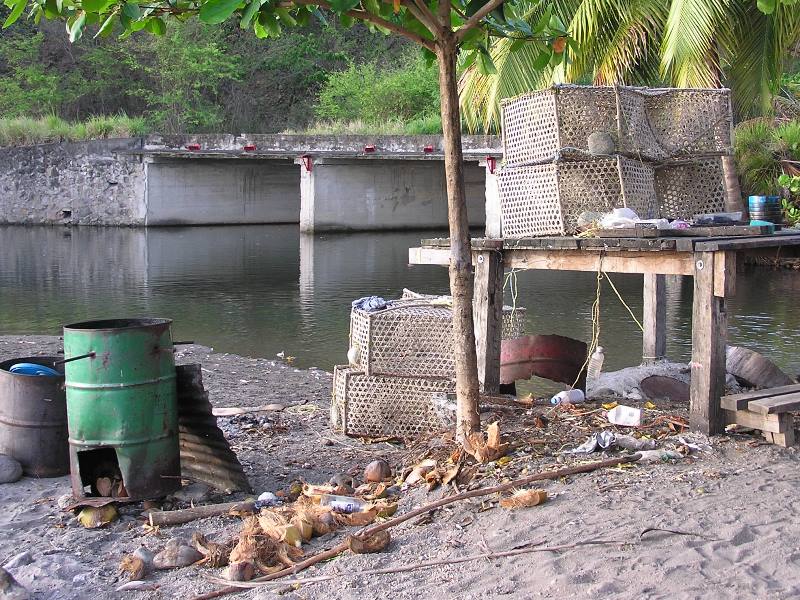